The Cincinnati Bengals (11-7 SU, 11-7 ATS) beat the Las Vegas Raiders on Wild Card Saturday, 26-19, covering as 6-point home favorites in the process. With the win, they earned the privilege of tangling with the AFC’s top-seeded Tennessee Titans (12-5 SU, 10-7 ATS) in Nashville. 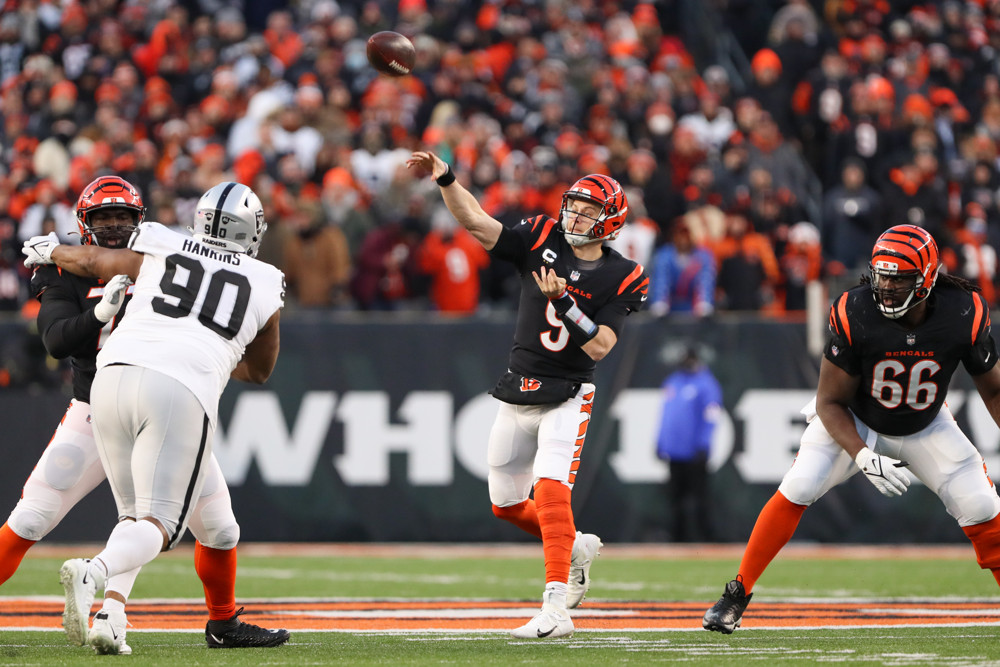 After sitting out wild card weekend as the AFC’s No. 1 seed and watching six games worth of action, the Titans will prepare this week for the Cincinnati Bengals in their AFC Divisional Playoff game on Saturday at Nissan Stadium.

Joe Burrow and the Bengals won their first playoff game in 31 years with Saturday’s victory over the Las Vegas Raiders.

How to watch Tennessee Titans vs. Cincinnati Bengals in AFC Divisional Playoff game

Cincinnati defeated the Las Vegas Raiders 26-19 at Paul Brown Stadium in an AFC wild-card game on Saturday. It was Cincinnati’s first playoff victory in 31 years, since before cell phones were capable of sending texts, as memes on the internet reminded folks in the days preceding the game.

But the win wasn’t just about ending the longest playoff win drought in the NFL. It was about the first step in making a run at the AFC title.

Over the course of the season, Cincinnati went from the projected cellar dweller in the AFC North to division champs, ending a six-year stretch without a playoff appearance. That journey included an overtime loss to the Green Bay Packers, one of the top teams in the NFL, and a Week 17 win over the Kansas City Chiefs, the AFC representatives in last year’s Super Bowl.

Those performances indicated Cincinnati wasn’t just a team that could win a playoff game. They showed the Bengals can hang with the best in the NFL.

For the second time this season, the Bengals needed to hang tough against the Raiders in order to pick up a win. The first came on Week 11 and set the tone for the second half of Cincinnati’s season.

The second victory was much more significant. It gave the city of Cincinnati something it hasn’t experienced in decades and set the table for the Bengals to have a truly special postseason.

“We expect to beat everybody that we play, not just hang with them,” Bengals quarterback Joe Burrow said after the game.

Burrow added: “I mean, it’s exciting. But this is expected. This isn’t like the icing on top of the cake or anything. This is the cake. So we’re moving on.”

The race to Super Bowl LVI began on Saturday with two games, Sunday gave us three and we’re now down to one game for Super Wild Card Weekend in the NFL with Monday night’s matchup between NFC West foes, the Los Angeles Rams and Arizona Cardinals.

That’s right — betting on playoff football! If you want to stay sharp over the course of the weekend and are looking for a bit of help doing so, you’ve come to the right place.

How to watch the Arizona Cardinals vs LA Rams

Our story isn’t written yet. pic.twitter.com/lpRXM58QjG

How to watch the Arizona Cardinals and LA Rams in the NFL playoffs?

That’s the recommended method. Whether with joy or agony, well, that’s the question. It’s been such an up and down season for Arizona, and the last few weeks have definitely been the down part. After starting the season 7-0, it’s been a bumpy ride for the Cardinals, including losing four of their last five.

So yeah, “on edge” is also a pretty good way to describe the mood for watching. That sounds a little more optimistic than “with dread” or “an impending sense of doom.”

What time is the ‘Monday Night Football’ playoff game on ESPN?

It’s the first-ever playoff game on “Monday Night Football,” and ESPN is offering a few options. Whether any of them will be worth watching ultimately is up to the Cardinals and the Rams, of course, but at least there’s some variety.

The traditional broadcast, with Steve Levy doing play-by-play and Brian Griese and Louis Riddick providing analysis, starts at 6 p.m. Arizona time on ESPN. This will also air locally on ABC 15.

“Monday Night Football with Peyton and Eli” will also cover the game, starting at 6:15 p.m. Arizona time on ESPN2 and ESPN+. I like the Manning brothers in this format, though some don’t. It’s the best alternative broadcast anyone’s come up with yet, and there have been many attempts.

Los Angeles have won 11 out of their last 14 games against Arizona. 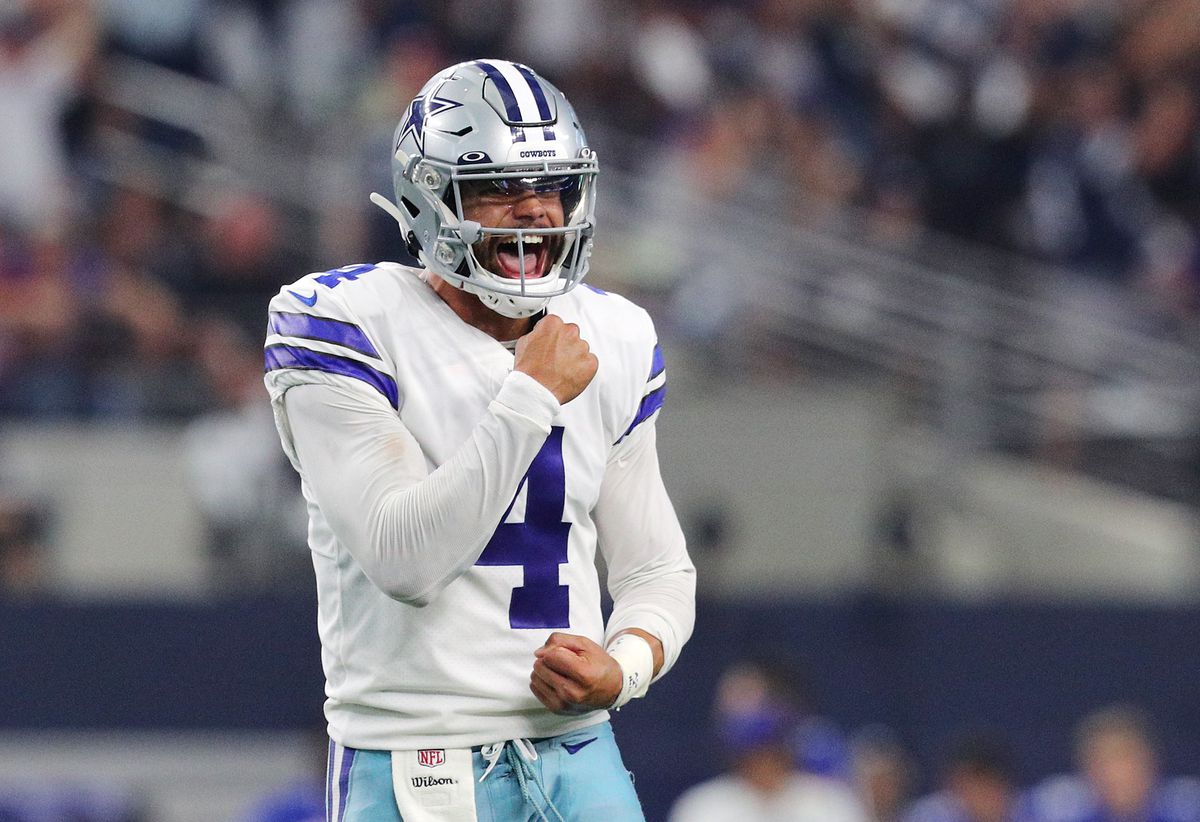 The Dallas Cowboys caused the biggest roster wave of the young 2021 season when they announced the release of linebacker Jaylon Smith on Tuesday evening. Smith has been an integral part of the Dallas defense for the last four years but his play had eroded to the point people wondered why it took so long. While the timing of a Week 5 release was odd, and several questions that needed answers were asked, it wasn’t shocking to anyone paying attention to his play or the composition of the Cowboys’ roster.

That composition brings to light a new quandary. Less than 24 hours after the Cowboys announced their surprise-timing release, the New England Patriots joined the fray in releasing two-time All-Pro cornerback Stephon Gilmore. Gilmore of course has been on the radar of Cowboys’ fans for a long time. His future availability has been written about on this site numerous times, and now it becomes a reality. But instead of having to trade for him, teams can now open their wallets to bring him into their fold. Should the Cowboys be one of those teams to pursue him? Here’s a look at the pros and cons of such an overture.

The Cowboys have moved away from a heavy zone concept and are running man coverage in over 60% of their snaps this year. Diggs is shadowing opposing team’s No. 1 receiver, but when teams are able to employ numerous top-level threats, the other receivers have been able to eat. Look at how Chris Godwin, Antonio Brown and Mike Williams terrorized the DBs in the first two weeks of the season, or how the Panthers’ passing attack scored in rapid fire in the fourth quarter when Diggs went out in Week 4.

Dallas Cowboys offensive lineman La’el Collins has sued the NFL and Commissioner Rodger Goodell and is seeking an injunction to halt his five-game suspension over substance abuse violations.

Collins has already served three games for the suspension and filed his lawsuit in Collin County, which encompasses Frisco, the location of the Cowboys’ headquarters.

It claims that Collins missed drug tests when the labor agreement reached in 2020 no longer allowed suspensions over missed tests or positive tests for marijuana. According to an AP report, the NFL called the suit “meritless.”

Collins’ suspension was announced the day after Dallas’ 31-29 loss to defending Super Bowl champion Tampa Bay in the opener. The remaining two games of the suspension are Sunday at home against the New York Giants and Oct. 17 at New England.

The lawsuit says the NFL misled an arbitrator by saying Collins had previously been suspended four games when he hadn’t. The NFL eventually decided to fine rather than suspend Collins over missed tests in early 2020.

In November 2020, the league was prepared to suspend Collins fives games over missed drug tests. The union negotiated a reduction to two games, but an appeal led to an arbitrator reinstating the five-game ban.

Collins’ representatives said the league announced the suspension with another appeal pending. The lawsuit claimed the announcement violated the confidentiality clause in the agreement between the league and the union over substance-abuse policies. The 28-year-old Collins is on his third contract, the most recent a $50 million, five-year extension signed in 2019.

The 2021-22 football season is officially underway, and while the best way to catch all of the games is still on conventional cable, cord cutters can still get in on the action with a few smart hacks.

While the 32 teams took to the field last year in a modified season due to Covid-19, the 2021 NFL season has actually expanded to a 17-game schedule (up from a 16-game regular season). The NFL has also expanded the playoff field from 12 teams to 14 teams, effectively allowing one more wild-card team from each conference (this was first introduced last year).

The Tampa Bay Buccaneers are the defending Super Bowl Champions and will be looking to repeat as NFL champs this year, led once again by star quarterback Tom Brady. The latest Super Bowl LVI odds have the Kansas City Chiefs on top, with oddsmakers also listing the Bucs, Buffalo Bills and Los Angeles Rams as other favorites to contend for the Super Bowl 56 trophy.

How to Watch NFL Games Without Cable

The 2021-2022 NFL season is being broadcast across a number of networks, including CBS, NBC and FOX.

CBS and FOX will air Sunday afternoon games, while you can watch Sunday Night Football on NBC.

A simple TV antenna (like this one from Amazon) will get you access to all four major networks in HD quality, along with other local stations in your area. Pay for the antenna once and enjoy “free cable” for as long as you have it installed. Our pick below can be mounted indoors or outdoors and delivers a range of up to 120 miles, to pick up more stations than most basic antennas.